"How do you prevent birds and drones from endangering airplane safety?"

ROBIN RADAR incorporates more than 20 years of scientific research into their purpose built avian radars. The systems are designed to operate entirely remote, either from the field using a ruggedized laptop, convenient from your office or in the air traffic control tower.

Elvira® covers a full 360 degrees view. It detects larger fixed wing targets at a range of five kilometres, and smaller multi-rotor drones detected at up to three kilometres. However, completely securing an area, requires more than just range detection. It requires flexibility and reliability. Elvira® provides unlimited coverage through its ability to combine multiple radar devices into an integrated sensor network. The output from multiple sensors is incorporated into one unambiguous picture.

Elvira® has the unique capability to combine advanced Doppler processing with an update rate of once per second. This results in unprecedented capabilities of tracking even the most agile drones.

Classification is the capability to differentiate between drones and birds or other moving objects. This is a critical feature to prevent false positives. To do so, Robin Radar Systems combines multiple variables in real time, including advanced Doppler techniques.

Where other systems may require a combination of multiple sensors to go from detection to classification of targets, Elvira® combines detection and classification in just one sensor. This capability saves precious time in the decision process. 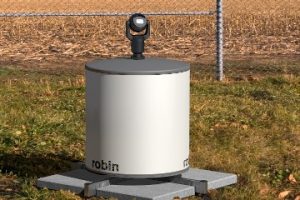 Military XL – this integrates with existing air force long-range surveillance radars. In contrast to the other configurations, which monitor local movements around the runway, this configuration is used en route to assess bird strike risk one hundred kilometers away, or more.

3D Flex – this combines a horizontal S-band radar with a flexible Frequency Modulated Continuous Wave (FMCW) radar to provide three operation modes, including one that provides an all-round 3D view. The 3D Flex configuration is able to measure wing beat patterns as one of the parameters that helps distinguish between species. This system can also be provided on a trailer for flexibility of location.

Order news directly to your inbox